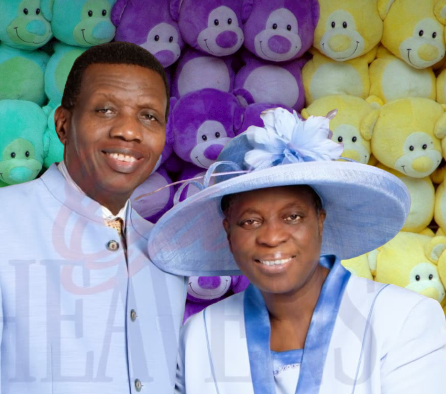 Pastor Adeboye’s wife, Pastor Mrs Folu Adeboye have warned single men to never consider marrying a wife on credit. She goes further to state that there is nothing like credit in marriage. Read her full assertions below:

Don’t marry a wife on credit, no credit in christian marriage, either today or tomorrow no credit. Don’t marry on credit, can I hear an amen? Pay the dowry of your wife and pay it joyfully. It must be paid joyfully.

So 1 Corinthians 9:25 says every man that striveth for the mastery is temperate in all things, now they do it to obtain a corruptible crown but we an incorruptible. Everything we do must be moderate.

Don’t because of laudable marriage that everybody will see and they will say ah! we’ve never seen it before like this oh, go and put yourself into debts or put yourself into sorrow; there is no need for it. Whatever you don’t have on the marriage day you will have it later in life in the name of Jesus. Read also, Pastor Adeboye: How I convinced my wife to marry me

Pastor Adeboye’s wife: The wedding celebration is just for few hours, whatever you can afford is what you should do!

When our marriage clocked 50 we were just joking among ourselves, then the general overseer said ah! did we cut cake at the reception? I said who remembered cake but when we were 50 only God knows how many cakes came to that house. The glory of the latter days should be better than the former. Brethren don’t because of that 4 hours celebration spoil your tomorrow. The celebration is just for few hours. Whatever you can afford is what you should do.

In RCCG I’ve seen marriages being conducted between 8 people: the wife-to-be, the husband-to-be, their best man or best lady or what do you call them now and then the parents of the two… 8 people.. and by the time they finish they just gave everybody Mr biggs and that was the end. Today their home is heaven on earth; they are into prosperity, things about their lives is glowing, their children have already even finished the university education, whatever they need today they are not poor at all. Cut your coat according to your clothe, be temperate in all things. It is not compulsory that you should pattern your own marriage to your friend’s marriage; just do it according to the will of God and according to what you have…Read also, Why God stopped speaking to me – Pastor Adeboye