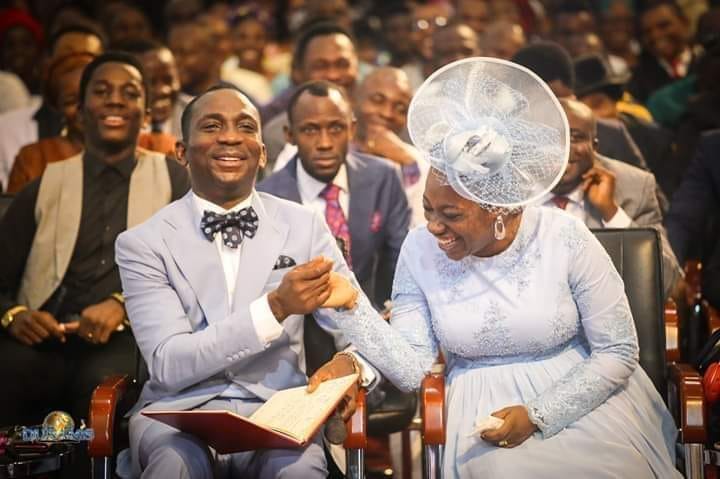 As I join the world to always celebrate these dynamic ministers of the gospel, questions arise in my mind. Why is this couple still so knitted together after many years?

Pastor Paul Enenche got married to his wife Becky on the 16th of April, 1994. Two years later (1996), they started the Dunamis International Gospel Centre. One would think this couple were too young in their marriage to step out into such a seemingly hopeless project at this time, putting into consideration the fact that Dr (Mrs) Becky Enenche was still nursing their first child.

I came to a conclusion that for them to have done this early in their marriage? They must have been deeply passionate about God’s purposes for their lives before they got married. These passion have not decline ever since. Instead, it grew so well, causing their marital bond to strengthen as the year goes by.

If singles would find, define and be passionate about God’s purposes before they get into marriage, we will have more lasting marriages today.

Again, amidst multiple career opportunities and achievements, the call of God came. They were to move to Abuja from Jos to begin the work there. Both of them heard God and were convinced about this call. With faith, against all odds, they obeyed the Lord.

How many married people today know how to hear God for themselves? How many singles out there can even be tenacious enough to wait on God for the trivial and major issues of their lives. If we have more Christians doing that today? Marriages will last forever.

So they left Jos for Abuja. They left their well paid jobs, their furnished apartment and in the first few months, lived and slept in a one room apartment. They knew no one in Abuja, only a friend that stays in Gwagwalada. They dared the shame and trusted in God’s promises. Only those who believe in a covenant keeping God can make such sacrifices.

What more can I say of their selflessness. Even when they had enough to get a better accommodation? They chose to remain in that apartment and build the Lord a befitting house. If husbands and wives in the home will demonstrate such selflessness to each other, the homes of believers will be heaven on earth.

In all, true faith in God and absolute commitment to His instructions are the reasons why the world has no choice but to celebrate them this season. They did not just believe in God’s promises. They worked and fought for its fulfillment. I believe this same principle worked in their marriage. They had God’s promises for their marriage and they worked and fought to bring it to pass.

In the spirit of their anniversary celebration, married couples should ask themselves, what is God’s purpose for our marriage? What has God said concerning our union? How much have I been fighting to bring it to pass? How much more efforts do I need to put to make it work?

And the singles should pay attention to the continuous admonition of Pst. Paul Enenche in most of his messages to singles, “Purpose comes before partner.” Find your purpose. Be passionate about your purpose. Live your purpose and don’t stop loving God. Because, all things work together for good to those who love God and to those who are the called according to His purpose.