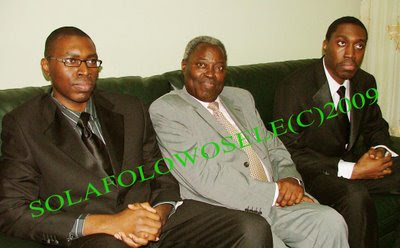 The first son of the general superintendent of the Deeper Christian Life Ministry, Jerry Kumuyi revealed in this trending video that he used to be a chronic sinner before the Lord saved him.  His father, Pastor W.F Kumuyi is the General Superintendent of the popular holiness church.

Jerry admonished his audience that being the child of the popular Pastor Kumuyi does not save anyone and it didn’t save him either until he personally encountered the Lord. This is a big message to pastor’s children who live waywardly hoping that their parent’s good deeds will cover up for them. This truth should also liberate young ones who are emulating the negatives in the lives of pastors’ children.

His friend and sinning partner, who is now born again, dives into the details of how he was a chronic cultist and how the Lord saved him and used him to save Jerry.“When I get angry, I don’t get appeased until there is a blood shed. I almost beat my mum to death. I was that injurious.” He said.

His story reveals how merciful God is. No matter how far you have gone from God, He still can save you if only you will ask his forgiveness.

Other information gathered from the video includes the fact that Jerry’s encounter with Christ happened August 14, at about 4:00AM. And that Jerry is a medical student in Chicago who has five months to finish.

8 Facts about Pastor Adeboye that will motivate you

I can only imagine the joy in heaven especially in the heart of mummy Abiodun Kumuyi. For the grace of God that brings Salvation has appeared to Jerry Kumuyi. Has it appeared to you?

Share this story to win more souls over to the Lord.